As Director of Peace Planning at Conciliation Resources, Cecilia was pivotal in supporting peace transformation in the Philippines and West Africa by facilitating -together with the programmes’ directors, teams and partners- tailored and creative action-research actions enhancing local  capacities for bottom-up transformation which robustly integrated to the national and regional peace  processes. 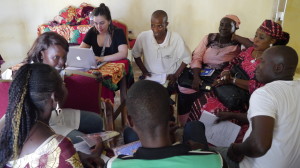 For example, in West Africa Cecilia supported the West African Director and partners in the creation and evaluation of a programme called “District Dialogue Platforms” –a £3 million project funded by the UK Department of International Development (DFID)-. The programme promoted participatory policy-making in the border regions of Sierra Leona, Liberia and Guinea, all areas affected by the consequences of civil war. In a post-conflict context -and after Sierra Leone achieved relative stability with the signing and implementation of peace agreements- political actors considered necessary to reach-out to the most distant areas directly affected by war. We engaged with local communities and, together with local partners, devised a participatory process to establish “citizens platforms” enabling debate so to devise and propose local solutions to specific post-conflict challenges including, for example, water management, land disputes and youth unemployment.

In relation to Colombia, Cecilia joined the group of faciliators engaged in the consultation process with t the Colombian diaspora living in the UK. During the sessions Colombians provided ideas in relation to the six agenda items negotiated by the FARC and the government in Habana, Cuba. The results from these citizens conversations were summarised in a report by Fundacion Ideas para la Paz and submitted to the negotiation team. 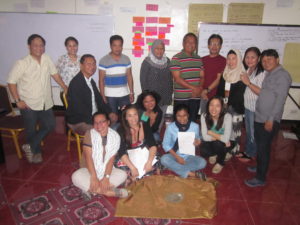 In this process, Cecilia’s role entailed advising on the planning of a national consultation enabling communities to provide ideas to peace negotiators. In 2014, Cecilia conducted and co-facilitated – together with local partners a number of participatory workshops involving indigenous, women, youth, media, business and ex-armed groups representatives who later led the national process to collect ideas in relation to the “Basic Law” (new Constitution). In this occasion, In a collaborative exercise, the participants undertook conflict analysis and assessed the entire process interlinking various dialogue moments in relation with the broader negotiation process.

Here it’s one of the public reseach reports produced during the above action-research events: WestAfrica-GTF-Lessons-Learnt_2013 (Conciliation Resources)