“Freedom is a political issue and also a (very) personal one

This is about the power of story-telling

These are stories and insights about how much men suffer oppression and later reproduce it in various ways, against women, other men and nature. In short, this is an argument to support the creation of safe spaces where men can de-construct their own victimhood; where men can empower themselves in a new, creative way, giving us all hope for a better future. As a woman, I wholeheartedly support the creation of spaces for men’s liberation – here are some ideas on why and how.

Like every woman, for as long as I can remember and on every single day, I have suffered direct or indirect violence at the hands of men. I learnt how to avoid them, how to abandon the circles where masculine toxicity made every chance to co-create and collaborate impossible. With limited success, I also strategized so as to seize some of the power they constantly take from us.  Only, at times did I manage to genuinely influence the way men think and operate with positive results. On these few occasions, I always had to position myself behind the scenes of the process: as a veiled advisor or confidante so men did not feel threatened. Today, I understand more deeply that if we want to tackle the root causes of violent systems, we need to create, support and facilitate spaces for men’s healing and (a different kind) of empowerment. This is part of my (personal) journey to reach this conclusion…

Two years ago (September 2015), I had to travel back to Argentina unexpectedly, in order to create the most wonderful and complex dialogue space: the space to deeply understand and forgive my ailing father as he prepared to die. I wanted to listen to my father. I wanted to embrace him fully before his departure. During those days, we discussed his own vulnerabilities, the huge pressure he suffered throughout his whole life and how his pain expressed itself in various violent ways. We each remembered and described events without fear or guilt, we cried and we laughed. We finally said goodbye in peace. I understood the root causes of my father’s behaviour. This experience still informs every personal and professional decision I take today. This experience is (quietly, beautifully) continuing to shape me.

Almost two years later (June 2017), I was invited to observe and evaluate the Team Syntegrity non-hierarchical conferencing session, bringing together social leaders from around the world. I decided to sit in and observe the “Parenting the planet” group discussion. The group was formed by only men (the group’s participants were selected by using the method’s algorithm). They immersed themselves in self-organised reflection, aiming to explore the linkages between men suffering patriarchal and socio-economic oppression and if and how, as a consequence, men reproduce violence against women, communities, families, nature, other countries and against colleagues working with them in the multiple institutions they shape and lead. They discussed the relationship between their own victimhood and the micro and macro aggressions of all sorts they create.

These two experiences resulted in one of those rare life “aha!” moments.

I strongly sensed that if we want to tackle the root causes of violent systems, we need to create, support and facilitate spaces for men’s healing and alternative empowerment. It’s time for men to take responsibility for their own liberation. They should create spaces and social movements to explore and re-shape their identities. They must open themselves and join women in our struggle to achieve a more just and peaceful world.

In all, after these experiences, an initial (almost intuitive) analysis became clearer: we all suffer the same patriarchal violence. Men become perpetrators;typically, women become victims. At times, we all reproduce the same unfair, fear-based and controlling status-quo, by omission, action or permission. This needs to change.

In the men’s own words 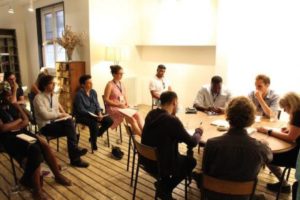 Below, some extracts of the conclusions of the Team Syntegrity “Parenting the Planet” group. I hope you enjoy them and also watch their own testimonies in these videos:

“It would be strategic to create feeling spaces where we can explore the masculine experience of patriarchy. Real democracy now!

We need a new economy based on feminization of politics, deprofitisation of war, valuing invisible labour and demarketisation of environment and caring.

It would be strategic to create feeling spaces where we can explore the masculine experience of patriarchy. Real democracy now!

I’m not having my needs met.

We can’t achieve change until we learn to live the life we want to see.

Nip it in the bud – change the tree before it grows rigid.

To have feelings and be able to express is more than a privilege – it is a miracle. We can use that capability in our favor, but politics start when we use it to be able to think what would other people, other beings, other objects feel.

There is an impredicative, self-reinforcing relationship between extractive capitalism, war profiteering and violence against women. We must teach men to recognize expressions of patriarchy at every scale. To intervene, we must address the social, cultural, and economic institutions that validate and perpetuate the cycle.

Humility is a great place to work from. From a position of humility, I can pay attention to the experience of others, start to undo my sexist programming, and build new habits that bring my behaviour in line with my values.

However, to challenge patriarchy, I believe we need more than humility: we need courage too. I want to hear the voices of men, boldly explaining to other men how everyone would be better off without patriarchy.

Cis men have personal experiences of patriarchy, but we’re not sharing our stories. How does it feel to be raised to dominate others? How did you overcome the guilt and shame of your complicity? How do you challenge your friends’ sexism and still have friends? How does it feel to carry around this heavy fragile mask of strength all day? 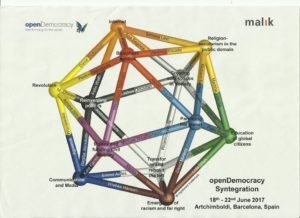 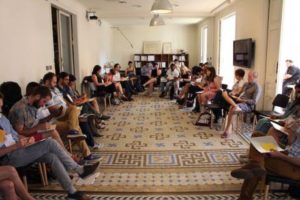